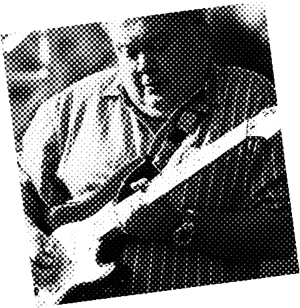 Alistair Coakley began his professional career in 1976. He was Lead Guitarist/Producer for the acclaimed band Hotline.

Hotline amassed album sales in excess of 500,000 units, and toured extensively in South Africa and abroad.

Hotline re-united in August 2012, to perform at the ‘702 Concert in the Park’, to widespread critical acclaim.

After the dissolution of Hotline, Alistair joined the Afro-Rock band Stimela. He toured Europe with them, and played to sell-out crowds at Le Zenith, in Paris.

He has appeared on recordings with well-known artists such as Johnny Clegg (including a European Tour in 2010), Mango Groove, Lucky Dube, TKZ, amongst numerous others. He played Guitar and Mandolin, plus scored the brass arrangements, for stellar Blues Guitarist, Dan Patlansky’s ‘Real Blues‘ album. He has also recorded and/or played guitar for such international stars as Joan Armatrading and Harry Belafonte. He has also played guitar for multi-million selling band ‘Clout’ (of ‘Substitute’ and ‘Save Me’ fame).

Alistair has performed Guitar Clinics for prestigious brands, such as Fender, PRS, and Gibson Guitars.

Alistair was the composer/musical director of the 1995 Rugby World Cup opening and closing ceremonies. He has produced commercial soundtracks for Volkswagen, Ford, BMW, Carling Black Label, and numerous other brands.

Highlight commercials include ‘Volkswagen Memories’, Vodacom ‘Seize The Day’, and FNB ‘Movin’ On’.

Alistair has appeared on S.A. Idols, and held the guitar chair in the ‘Strictly Come Dancing’ band.

At present he runs Hitman Music Productions, a successful music production company based in Johannesburg.