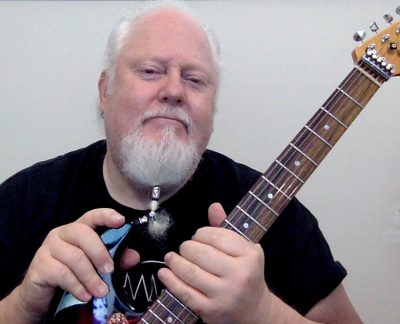 “Alistair hurt everything from my pinkie to my bottom”

Alistair and I go back so far it is becoming scary to even think about. (All the way to the late eighties if my increasingly porous memory is to be trusted.) He has always been supportive and occasionally even complimentary about my song writing endeavours. About my guitar playing he has sometimes been tempted to be ever so slightly less so. I remember him picking up one of my guitars way-back-when and two-tone-bending something around the 17th where he discovered to his tactile revulsion, intellectual amusement and my great shame, a stomach-churning patina of crunchy green Verdigris and good old fashioned rust of the kind that never sleeps. With his trademark impish smirk, he chimed, “Unexplored territory Gabacious?” I resolved then to right that wrong and have spent the intervening decades trying to do so, only it seems, to acquire an embarrassment of bad habits.

Having long respected both his ear and his tone-stick smacking prowess, when I heard that my old mate was considering giving lessons, I jumped on the phone like a seagull onto a sick prawn. It is by far the best thing I have ever done for my playing. It has also been moderately painful. (In the best possible way of course.) My brief to Alistair was simple. Help me fill the holes in my knowledge, address obvious weaknesses and eliminate bad habits. This is what we have been doing for some ten weeks and long may it last.

After the first few exploratory calibrating lessons we got serious about fixing my many bad habits and in the process discovered many that I didn’t know I had: Sitting position. Always practicing with a strap in a performance-friendly attitude. Hand pronation. Double-stops. Playing over the changes using the tonal centre of chords as reference rather than defaulting to tired pentatonic clichés. Arpeggios. And last but not least; a diabolically inhuman six-fret stretch in the first position from whence to stagger drunkenly up the board through the whole-tone scale. My initial response was, “This is not physically possible!” Alistair is a little bloke with little paws so when he said, “Stick with it and it will come eventually and the benefits will prove to be well worth it” I had to listen. After a few weeks and many days when everything from my fingers, to my eyelids and even various sphincters seem to ache, I am happy to report that I am making solid progress and, as promised, the benefits are legion. Playing is a lifelong journey. There is no arrival. As we move forward so too does that far horizon. While we may never reach the Grail, with the right help we may catch a tantalising glimpse of it from time to time.

Thanks to Alistair I am getting better at comping, playing over the changes and playing inside and outside the tonal centre of chords. I believe I am finally escaping pentatonic prison even though I have spent so many years there I suspect I will always hear the baying of the hounds. No matter who you are, how good you are (or how good you think you are>:) Alistair will help you become a better player. And if you are anything like me, he’ll also make you laugh until your face hurts.
One Love

I started playing guitar over 40 years ago – to the extent of spending some great years gigging with various local bands. I haven’t played much in the last 10 years though and have become more than a little “rusty”.

I have admired Alistair’s guitar work for many years and rate him as one of SA’s top guitarists. At the height of Covid, I saw a post on Facebook that Alistair Coakley was offering guitar lessons for non-beginners on Zoom – so I jumped at the chance to “oil my strings” under the guidance of a master muso!!

It was an inspired idea on my part!!

He has done so much more for my technique than I expected. My sound is far more melodic and I have learnt that the thumb is NOT just there to hitch a ride with.

I continue to enjoy my weekly interactions with Alistair. His style is warm and relaxed.

I’d highly recommend this experience to anyone who wants to brush up on their skills and de-stress at the same time!

I was a guitarist for many years and used to give guitar lessons myself full time. I had sadly put the guitar down for 15 years due to some unfortunate personal reasons. This year I picked it up again and I wanted to quickly get back to playing at the same level as I was and even better.

I could not have made a better decision choosing Alistair for this task. Within a month and a half through Alistair’s guidance and tutelage I was not only able to get back to the level of competence I was when I put the guitar down, but his fine tuning of my technique gave me more control over the guitar than I ever had. I finally have a solid concrete foundation to begin building on and I am so excited to see what guitarist I can become in a year with Alistair’s guidance.

Alistair is patient, personal and has a great sense of humour. For the experienced guitarist, Alistair’s lessons are like trying to drink water from a fire hydrant. He has a wealth of insight and information. I can honestly say, I have not looked at, or experienced my instrument the way I do now after this short period of time with Alistair.

Alistair’s unique value proposition is that he can not only teach you to be a lightning fast guitar player, but he is also able to teach you how to be a melodic meaningful player which is something that is very rare in most teachers today. He helps you embrace your own flavour of playing to really refine who you are as a guitar player.

He is absolutely highly recommended!